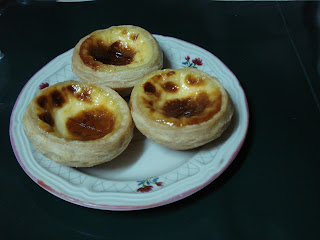 My cousin Kat and I went on a trip to Macau late last year. Aside from taking in the sights - the Ruins of St. Paul, The Venetian Macau, the Macau Tower, and the numerous churches and museums, among others - we also had the time of our lives sampling Macanese cuisine Portuguese egg tarts became our favorite.


These egg tarts are made with a puff pastry casing, with caramelized custard centers. One store which sells them in Macau makes exceptionally good ones, with a very generous sprinkling of cinnamon to add to the flavor. This lovely pastry originated from Lord Stow's in Coloane island in Macau, established by Andrew Stow, a British, who modified the original Portuguese recipe to make the ones which are now commercially sold.


The Lord Stow's branch in Mall of Asia has since then become a haven. Archie is himself a convert. You probably will be, too.
Posted by Monique at 9:44 PM

This is my kind of blog (though I'm not really sure what "blog" means, being the techno-freak that I am)! Looking forward to more scrumptious delights to whet my appetite. Yum, yum, yum!

I hope to see you here a lot more, then. And don't forget that I'm going to feature your delicious empanada one of these days. ;-)