I'm no chef, really, to attempt to make an original recipe from my own gastronomic imagination. Unlike my classmate and friend Ana, who makes her own original recipes, I usually just copy or lift recipes that I come across with on magazines, or cooking shows, or, as in the case with her Potata a la Ana, those that were given to me because I very much liked the taste of the food.

The last couple of months, I bought 2 back issues of Rachael Ray's "Everyday" magazine, which featured a lot of recipes. However, when I inspected some of these recipes, I realized that either (1) the ingredients she used are not available in the Philippines, or if available, may prove to be difficult to find, or (2) the dish was too complicated for a beginner like me. I tried one that I thought was fairly easy to do called the "Orange Beef and Broccoli" which was a sort of stir-fried dish using sirloin strips, broccoli with a hint of orange flavor. I modified the dish a bit which, I realized, should not have been so. I'll give the dish another go next time so I can feature it here and you can copy it out.

I haven't bought another copy of "Everyday" since then because out of sooo many recipes, I only saw one that was not too complicated and made use of easy-to-find ingredients. (For example: know what a halibut is and where I can find it? Don't know about you but that was the first time I ever heard of that. Second time was in Iron Chef America where I learned that it's actually a fish.) That was when I realized that it would probably be a lot wiser to buy the local cookbook magazines. It should be easier to work with something closer to home.

So last night, while Archie and I were browsing through the stuff at Booksale in MOA, I inspected the food magazines rack and saw this "FOODIE" magazine. 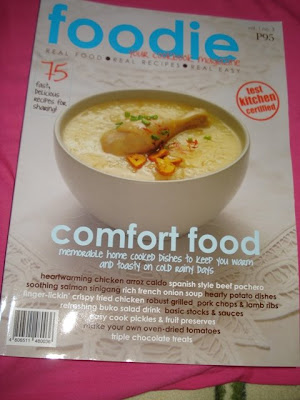 I bought a copy because I was intrigued by the 75 "fast, delicious recipes for sharing" which supposedly includes comfort food like arroz caldo, fried chicken, and some potato dishes (love potatoes!) too. I was, of course, hoping to find some recipes that I could replicate and modify to make them my own. 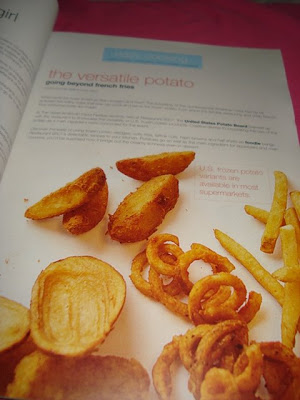 "FOODIE" didn't disappoint. Aside from the easy recipes, it also featured how-to's, such as making basic stocks and sauces, and pickling and jamming. It also has one entire page featuring the very informative "words of comfort", listing down culinary words you probably always hear, but don't even know the meaning. (I'm sure you love braised beef but know what "braise" means?) Best of all, it had an adobo recipe in it which I want to try out ~ I'm on a mission to find the best way how to cook adobo because so far, my adobo, in my opinion, is merely passable. 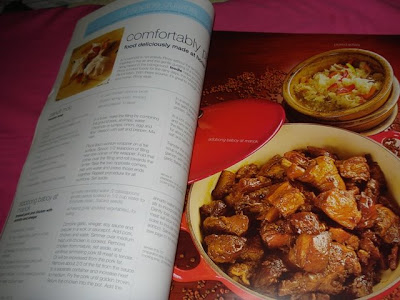 Check out this latest issue of "FOODIE" magazine. You won't be disappointed. :-)
Posted by Monique at 2:03 PM No comments:

I made my first batch of empanadas over the weekend, and here are a few notes for future reference, just in case you find yourself craving for them and want to make some:

1. It would be a good thing to invest in a measuring cup, a set of measuring spoons, a wooden board and a rolling pin. You'll need it not only for making empanadas, but for cooking and baking in general.

2. Make sure that you have the correct measurements for the ingredients especially when making the dough. In my case, I completely forgot to buy a measuring cup, so I had to make do with what was available to me. The result was not really disastrous, but the consistency of the dough was not exactly what I had imagined it would be. I think it was short of the flour, because my dough was so sticky, it stuck all over the rolling pin and was very difficult to work with.

3. Don't think that you can dispense with the rolling pin, because it will largely affect not only the aesthetic value of the finished product, but it's also necessary so that the thickness of the dough will be uniform on all sides. When I made the dough, and because it stuck to my rolling pin, I thought I could just pat the dough flat using the palm of my hand. Of course it flattened, but I wasn't able to make good dough circles and there were portions that were either too thick or too thin.

4. Deep fry them! Make sure they're completely submerged in oil so that the empanadas will cook evenly. And don't let them stay too long in the oil, they cook easily and besides, the filling is already cooked. Just let the dough slightly brown.

Hopefully, the next batch I make will be a lot better. Tomorrow I'll go get myself the necessary props for a better empanada dough. :-)
Posted by Monique at 10:31 PM No comments:

Oh yeah. Your eyes are not deceiving you.

Aren't I the domesticated one? Haha!

Yep, that's a rolling pin you're seeing right there. And I just bought it for 167 pesos tonight at SM Hypermarket in MOA.

And this Saturday, for the very first time in my entire life, I'm going to:

and play with the rolling pin.

I'm still not baking, though. I don't have a good oven yet for that purpose. All I'm going to do is make the dough for my experimental empanada ~ I cooked the filling last night with the help of my mom, who chopped the carrots and cheese for me. Empanadas are deep-fried, so I won't have to worry about the preheating and all that complicated stuff that baking entails. :-) If this batch is a success, or at the least, needs very minimal modification as to flavor, I'm going to make another batch for her birthday come November 1st.

Email ThisBlogThis!Share to TwitterShare to FacebookShare to Pinterest
Categories: kitchen props, the gamut

The lull in posting was caused by a broken desktop, a busy couple of workweeks, and delay in the recipes I was supposed to post.

Check back for Devery's humba.
Posted by Monique at 2:53 PM No comments:

Email ThisBlogThis!Share to TwitterShare to FacebookShare to Pinterest
Categories: the gamut 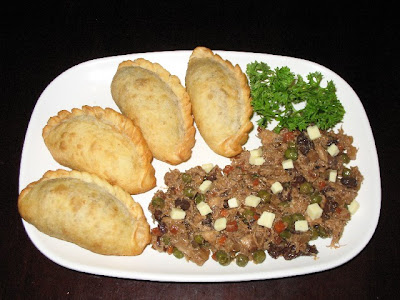 It's been weeks since my friend Rogelyn's birthday bash at the office ~ same time I promised to post her very special empanada recipe, as well. The delay was caused by too much work but don't worry, here's the recipe. Now I haven't tried this one yet, but over the weekend I plan to. Why don't you and I try it at the same time and compare notes, huh?

1. Sauté garlic and onion.
2. Add cubed carrots, potatoes, and the green peas. Mix well.
3. Shred the chicken breasts into small pieces and add to the mixed vegetables. 4. Season with oyster sauce.
5. Add raisins and cubed cheddar cheese.
6. Let stay in the fridge for at least 3 days. (Roge says the longer the filling stays in the fridge, the better it tastes.)

1. Mix the flour, white sugar,and baking powder in a bowl.
2. Beat the eggs and add the water and melted butter.
3. Knead until dough is smooth and satiny.
4. Cut into 20 equal portions.
5. Roll out dough into perfect (if possible) rounds, about 3.5 - 4 inches in diameter each.
6. Place a generous amount of filling in the center. Fold in half, forming a half-moon.
7. Crimp around the edge of the empanada.
8. Fry in deep hot oil. Be sure to drain out excess fat!


The recipe is, admittedly, a bit labor-intensive. Roge says she even cuts the raisins into halves! But you needn't do that, really. Just follow the instructions as faithfully as you can and I can guarantee, you'll make mouth-watering empanadas just the way Roge does. ;-)
Posted by Monique at 10:54 PM No comments:

Email ThisBlogThis!Share to TwitterShare to FacebookShare to Pinterest
Categories: pastries 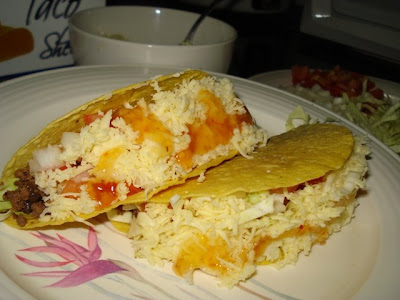 My sweetie has his own "hidden talent" in the kitchen. ;-)

He made tacos for me, a family favorite, from what I reckon from his stories. (This cousin can finish this much and that other cousin can finish more.) An aunt can even make taco shells from fried lumpia wrapper. Now I haven't seen anyone do that but from what Archie says, taco shells are hard to come by in the province so they make improvised shells from lumpia wrappers. 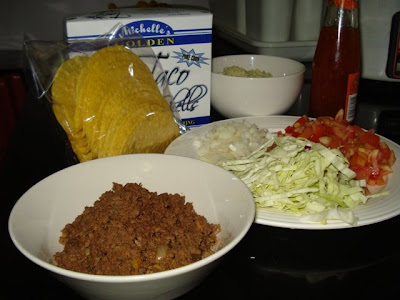 The only thing you need to cook for these tacos is the ground beef. For the other ingredients, except for the cheese and sauces, all you'll need is a chopping board and a good knife, and you're all set.

1. Chop the red onion. Crush the garlic and remove
the skins. Saute in a pan.
2. Add the ground beef and cook well. Add salt
and pepper to taste. You can also use half a packet of ginisa
flavor mix (like Aji) that are available in groceries, or a tablespoon of
soy sauce.
3. Chop the tomatoes and white onion into small pieces. Chop
the cabbage into short strips.
4. Grate the cheese.

1. In the bottom of each taco shell, put a generous helping of cabbage.
2. Add the cooked ground beef and the grated cheese. Layer with sweet chili sauce and garlic sauce.
3. Add the tomatoes, white onions, and more cheese.


Of course, it's up to you to add more chese or put in less onions, according to your taste. Archie says you can also use salsa, or add some chopped mushrooms on the ground beef if you like. Or, instead of ground beef, you can cook shredded chicken. Enjoy!
Posted by Monique at 10:18 PM No comments: