It's only the second time I'm going to make empanada, recipe courtesy of my friend and former officemate, Roge. The first time I experimented was around this same time last year, in time for Mama's birthday which we usually celebrate in the cemetery, being All Saints' Day. That first attempt was a disaster, as I didn't have the proper kitchen tools (read: measuring cup). This time, being fully equipped, I know I can do better.

I've practically perfected the filling, it tastes just the way Roge makes it. So on that aspect, I give myself a pat on the back. 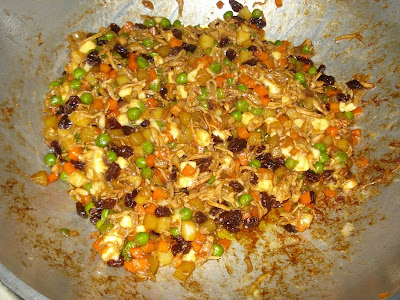 However, the dough is another problem.

I was doing great measuring, mixing the ingredients and kneading the dough, except for a few wee bitty times when the dough would stick to the board, which I remedied by scattering flour all over. When it came, however, to the part where I had to cut the dough into 20 equal pieces, which is necessary if I want to have uniform-sized empanadas, and then roll them out into perfect circles, I faltered. I couldn't seem to roll the dough thinly, and into circles ~ they just roll out into shapeless, uneven masses, and continued to stick to the board and the rolling pin. My neck and shoulders were sooo sore by the time I decided to make do with whatever shapes I came up with ~ at least, I can adjust when I folded and crimped the edges. Yun nga lang, di magkakasinlaki yung finished product. :(

Another blunder was when I dropped the first pieces onto very hot oil ~ I should've cooked them in medium-heat oil only. Mabilis tuloy nag-brown yung first batch, which is not really a problem because the filling is already cooked, anyway. But I would've wanted them to turn a golden brown sana, not toasted brown... 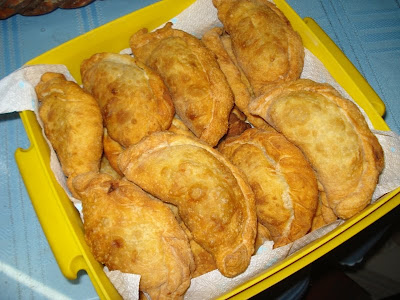 When it came to my favorite part though ~ the taste-testing ~ I had to just give myself not just a pat on the back, but a huge round of applause as well. Tasted really good!

This was our second time to visit the restaurant in Mall of Asia, and as per usual, we love what we had.

Their two-piece Hamburg Steak (really just your ol' familiar hamburger steak) with gravy is of course a delight. Archie had this before but with demi glace sauce, which is also good. The patties are not as thick as I'd like, but juicy and tender nonetheless. Trademarks of a worthy hamburger. 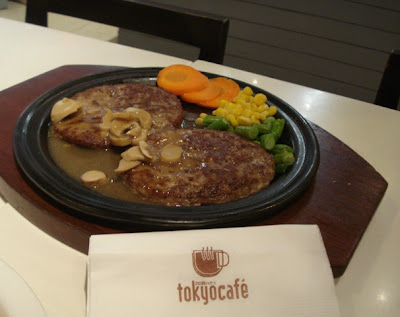 We also had their Pescatore, which is essentially seafood pasta with tomatoes and olive oil. It had a generous amount of clams and shrimps in it, and the tomato sauce wasn't too sour (some people like the Italian-style sour sauces... I like mine tempered). 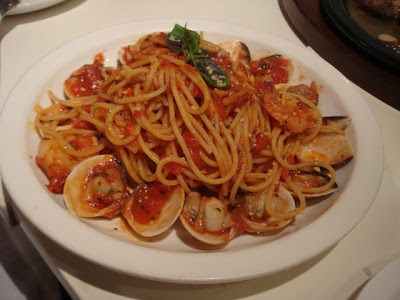 Down it all with peach iced tea, and we're good to go! Price is reasonable and the wait staff are courteous, too, so we'll definitely be going back to this place.